Jason B. Schmidt is the world’s premier (and only!) Beatrice Arthur impersonator. Schmidt’s portrayal of Bea Arthur celebrates the Broadway and television star’s most iconic moments including The Shoestring Revue, Fiddler on the Roof, Mame, Maude, the Golden Girls, and Bea Arthur on Broadway – Just Between Friends and Bea-yond! The man on the moon is… Jason B. Schmidt as Beatrice Arthur.

Schmidt made his debut as a Bea Arthur send-up named Dorothea Xbornik in 2010’s Thank You for Being a Friend: The Musical off-Broadway. Following that run, he and the show’s choreographer, Amy Anders Corcoran (Escape to Margaritaville, Freaky Friday), made a pact to create something together. That exciting creation was Beatrice Arthur: Astral Dame (#BeaAstralDame). In this one “woman” show, Bea Arthur comes down from the heavens for one last musical hurrah. Guided by her celestial stage manager, Jimmy Durante, Bea sings us through her dearest memories and throws in a few extra surprise wishes that never quite came to fruition in the mortal world.

The Golden Gays NYC (or GGNYC) burst onto the scene in 2017 – first at RuPaul’s DragCon, then at the famed Rue-La-Rue Cafe. What began as a flash mob extravaganza has skyrocketed to sold-out engagements, tours, and cruises all over New York City and beyond. In the summer of 2018, the Golden Gays hit musical “Hot Flashbacks” premiered to rave reviews off-Broadway at Theatre Row. You can frequently find the girls at the Laurie Beechman Theatre, New York’s premier destination for queens from RuPaul’s Drag Race. Pride Tour 2019 marks the third successful GGNYC tour, expanding the Golden Gay’s reach further across America. Their Christmas spectacular “Thank Yule For Being A Friend” played to enthusiastic audiences in New York City, Baltimore, Pittsburgh, Philadelphia, Rochester, Cumberland (MD), New Hope (PA), and Asbury Park (NJ), where their brunch shows at The Asbury Hotel have become an iconic staple of the community. Look for the GGNYC booth at RuPaul’s DragCon NYC every September.

The ladies are breaking into the Florida circuit later this December when “Thank Yule For Being A Friend” plays a two-week residency at the Empire Stage in Fort Lauderdale. You can also catch GGNYC sailing on the high seas with Celebrity Cruises.

From corporate events to cabaret shows to birthday parties, the sky’s the limit for where Bea Arthur, Dorothy Zbornak, Maude Findlay, or maybe even Vera Charles could appear. You don’t want to miss any of the excitement, so be sure to follow Jason B. Schmidt on social media.

TheGoldenGaysNYC@gmail.com to book the “girls” 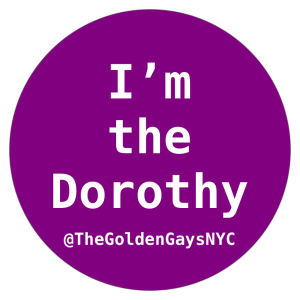 Repost from @ilovelucy.thegoldengirls
Hey there #BaltimorePride, @TheGoldenGaysNYC will be hanging out at The Brewer's Art from 4-8pm on Sunday. Photo ops, merchandise, drinks and a PRIZE GIVEAWAY. Come on by and see us on Sunday!⁠
Did you see the fabulous giveaway that The Golden Gays are having!? Check it out!⁠
@TheGoldenGaysNYC are giving away another fabulous prize bundle. #GoldenGirls tees, #TheGoldenGirls earrings by @capsizeddesigns, a #vintage beaded purse and MORE.⁠
Best Comedy TV shows of the 70's...⁠
We're back in #Pittsburgh on July 11th with Arcade Comedy Theatre. Tickets NOW ON SALE. Check Upcoming Shows on @TheGoldenGaysNYC website or linktree.⁠

Hey hey #Baltimore bosom buddies! Join us TOMORROW 6/20 from 4-8PM @ the dazzling Brewer’s Art in Mt. Vernon! 🌈⁠
✨NEW YORK CITY ✨ Our first live show in the big apple in a year and a half is NEXT WEDNESDAY- June 23rd, 7:00pm. The perfect way to start off your Pride 🌈 weekend of fun. Click the LinkTree in our bio for tickets today!
#PopCulture alert!!! Isn't this artwork of our girls just CUTER than an INTRAUTERAINE?!?! Bare Tree Media Inc created it and we're so grateful that they did! 😍⁠
Meet our new friend, Baby. He needed a loving home and we just couldn’t resist. In a lot of ways, he reminds me of Jimmy Dean…Heard he’s worth $100,000! 🐷
#GoldenGayHistory of the week! Last week, #RueMcClanahan had a visit with some #cats... Guess who she meets this week?!?!? I'll give you a hint; it's not a singing showbiz chicken! 🐶⁠
Feeling PRIDEFUL?!? So are we! Why not send a bosom buddy a personalized message from us, GGNYC 🎬⁠
%d bloggers like this: