We just completed our amazing final dress rehearsal and I have to tell you, it’s going to BEA spectacular. I really hope you will join us. Tickets have sold very well, but of course I want to have a full house and really make our investment of time, money and eyeshadow pay off. Will you please help us?

And, I have two comps that were purchased and donated back to me which are available for two lucky so and so’s. Message/Email/Text me if you want them!

The show is THIS TUESDAY. Follow Bea all the way there!

CLICK HERE TO SEE THE PRESS RELEASE FROM BROADWAYWORLD.COM

Jason B. Schmidt, star of Christmas With The Crawfords, will be starring as Tony Award winner Bea Arthur in the new one man show, BEATRICE ARTHUR: ASTRAL DAME. The one night only performance is April 14th at 7:00pm, at Stage 72 in New York City.

Special guest star, Ms. Vodka Stinger, will be making an appearance in this performance for a very special duet!

BEATRICE ARTHUR: ASTRAL DAME brings America’s most sardonic and sassy golden gal back to the New York stage for one night only! Expect Bea’s most favorite show tunes, along with a few new surprises that only she can deliver! It’s an out of this world evening of comedy, quips, and everything Bea!

BEATRICE ARTHUR: ASTRAL DAME will be directed by Amy Anders Corcoran, with music direction by Mason Griffin. The show is produced by Robert W. Schneider.

Tickets are $15 with a two-drink minimum (cash only at venue). For tickets, visit www.stage72.com

Your sassy, sardonic, and statuesque dame returns to the New York stage for one night only!

Stay tuned for all details in the coming weeks.

Only 3 more performances left of the ridiculously campy Christmas with the Crawfords. Friends and family use the exclusive code “JOAN” for discounted seats to these final shows, but hurry as they will sell out!

Here’s some great pics and a video from the show:

Last night we had an amazing first performance! The audience nourished us fully with their laughter and applause and presence! Whew! The NY Post and NY1 were in the audience as well, so be on the lookout for fun interviews, videos and pictures!

There’s a discount this week for $35 tickets if you use code ONLY4U. 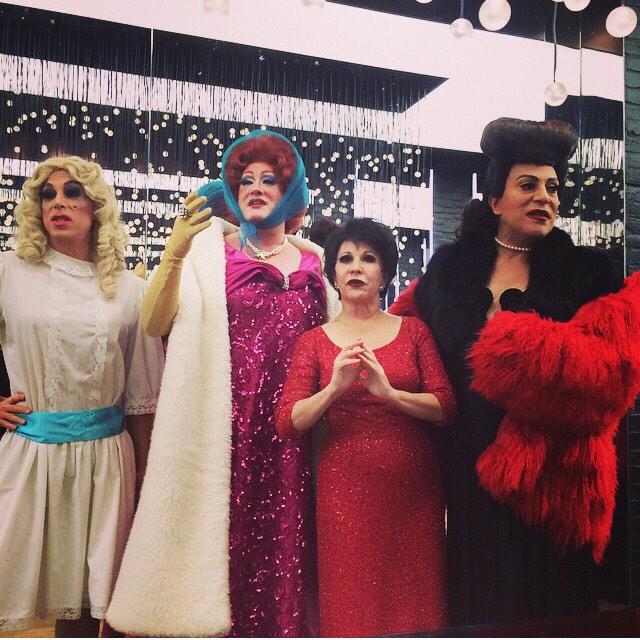 A fabulous montage of your favorite parody duo from venues all over NYC performing their hit eponymous song P-A-R-O-D-I-V-A-S (a send-up of Fergie’s GLAMOROUS), featuring guest appearances by Jeremy Wilson, Sutton Lee Seymour and one un-named elf’s junk. Please like, share (Cher) and comment. Don’t forget to follow the divas everywhere they go, and also on twitter. @TheParodivas

Thanks to Mattioli Productions for compiling! https://www.facebook.com/mattiolipro

THE PARODIVAS FAB YOU US SPOOKTACULAR*

Use code “party” and pay no fees!

"Piscator was a seminal influence on Bertolt Brecht, whose “The Threepenny Opera” with Kurt Weill occasioned Arthur’s breakthrough, when she was cast as Lucy Brown in the heralded 1954 off-Broadway production with Lotte Lenya. Arthur, by this time, had already been performing regularly, thanks to a theater culture that knew a good bass-baritone voice and imposing build when it saw them."⁠
Thank you for being a friend, Oakdale, PA! 💖✨
Stunning photos from @broadwaytheatreofpitman #Pitman, NJ⁠
And Then There's Yente: Bea Arthur's Golden Career⁠
#GoldenGirls #DragBrunch #NYC
Hot on the heels of his record-breaking Hello, Dolly!, composer Jerry Herman returned to Broadway with another blockbuster, Mame, which opened to rave reviews at the Winter Garden on May 24, 1966. Based on the novel by Patrick Dennis and the play Auntie Mame by Jerome Lawrence and Robert E. Lee, the musical was, in a very real sense, “presold.” It featured a grander-than-life charismatic heroine, a real riches-to-rags-to-riches life story, and a rousing score by one of Broadway’s newest wunderkinds. And it had a star of the first magnitude in Angela Lansbury who appropriated the role and made it her own, even though it had been identified before with the great Rosalind Russell. Mame was nominated for the Tony® for best musical that year and enjoyed a long run of 1,508 performances. First LP release: June 3, 1966⁠
Loading Comments...